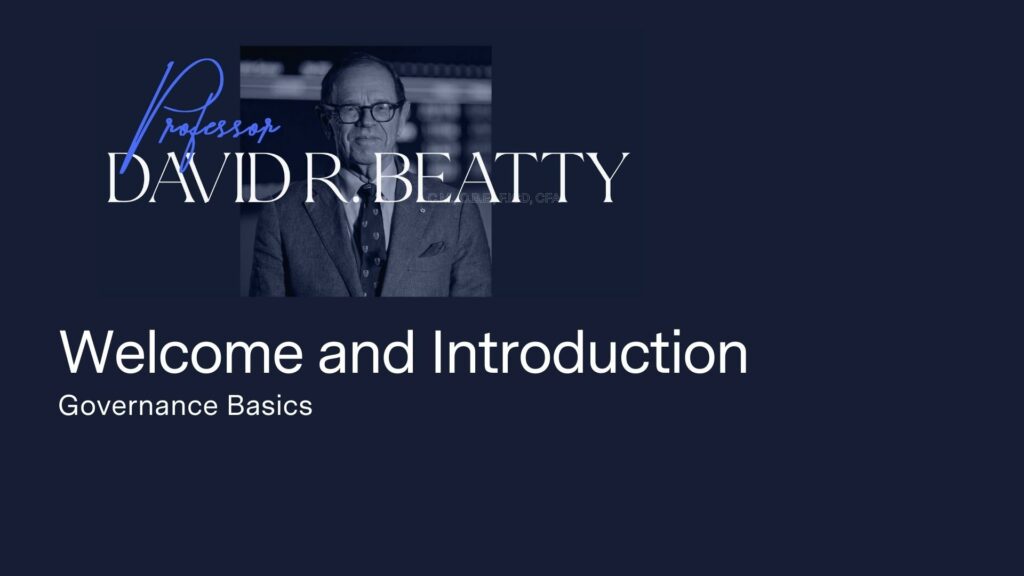 Welcome. This is a course intended to help you build, create or improve a board of directors so that it adds value to your business on an ongoing basis. Developing an effective board of directors is a distinct possibility and a necessity if you are going to build a successful company, but it’s also not a very easy task.

My name is David Beatty. My day job is at the University of Toronto where I’m a Professor of strategy at the Rotman School of Management. I have a ton of experience on boards in publicly traded corporations. I’ve been on 39 different boards — thirty-nine — in the United States, Mexico, Canada, Australia and the United Kingdom.

And I’ve been chairman of nine publicly traded corporations — some big, some medium and some not so big. So, I have lots of experience in the world of publicly traded companies. I have a portfolio of my own. My own family of companies consists of 10 startups, and I’m chairman of two of them. I am in the startup world as well, worrying about how to build boards and how to create long-term value for these companies.

In the world of educating and/or training directors I am also very experienced. I started a course here in Canada called the Directors’ Education Program (DEP) – a partnership between the Rotman School and the Canadian Institute of Directors (ICD). It’s a rigorous 12-day course, which boasts over 10,000 graduates from across Canada.

In addition, I have worked extensively for the Australian Institute of Company Directors (AICD), and I’m a colleague of those at Stanford who created the startup governance course.

Overseas in Europe, I’m a member of the ICGN (International Corporate Governance Network) representing something in the order of $53 trillion dollars — that’s trillions of dollars of assets under management. In 2017, I was given an ICGN Lifetime Achievement Award.

In the Middle East, I teach in Dubai with the Board Development Institute (BDI), and I started the governance course for Saudi Aramco, which is —from time to time— the world’s most profitable company.

So I have a lot of both practical governance experience and teaching experience globally.

And I am confident I can add value to your ongoing enterprise if you keep reading the rest of these posts. Thank you for starting this course. And I look forward to working with you.

David Beatty is an adjunct professor and Conway chair of the Clarkson Centre for Business Ethics and Board Effectiveness at the Rotman School of Management. Over his career, he has served on more than 39 boards of directors and been chair of nine publicly traded companies. He was the founding managing director of the Canadian Coalition for Good Governance (2003 to 2008). A version of this article will also appear in the Winter 2017 edition of Rotman Management, published by the University of Toronto’s Rotman School of Management