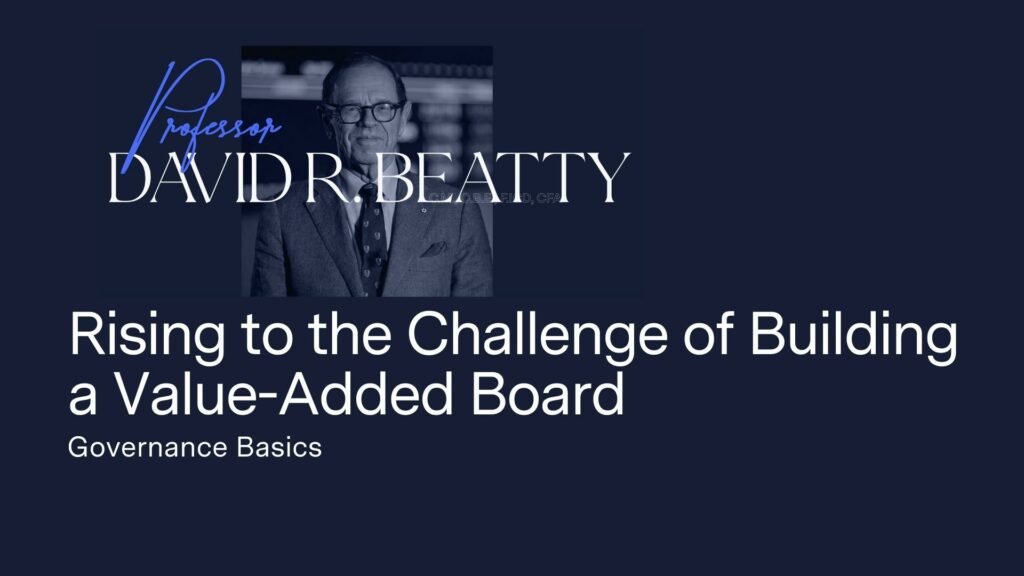 We’re working on how to build a value-added board. And I want to start by making sure you understand that this is not an easy job. In fact, it’s a very, very difficult job.

If you think about the publicly traded realm, there are many examples of failures: Enron, WorldCom, Adelphia, Parmalat and more recently the global financial crisis and then Wells Fargo and Boeing to name a few. A lot of companies around the world gone out of business because of an inability of the board of directors to oversee competently the ongoing affairs of the business.

And when you look at modern catastrophes, like the Boeing 737 MAX — two planes crashed, hundreds of lives lost — apparently within the company, there was a clash of cultures between those who were on the sales and marketing side from the McDonnell-Douglas acquisition, and those who were on the engineering and safety side from the traditional Boeing culture. A trade-off between people and profits; between safety and sales. No one on the Boeing board apparently understood that cultural clash to the enormous cost in human lives and the very reputation of Boeing itself. Since then,  there have been huge changes in the governance structure and processes at Boeing. Too little too late ?

And think about Theranos. Their Board of Directors included the who’s who of America. Henry Kissinger, James Mattis, a four-star general in the US Army and other celebrities. Theranos has disappeared and it’s founder and it’s COO are both going to jail.

So all of these catastrophes in 2000, in 2010 and more recently in 2020-21 tell you that there’s something really hard about being an effective Board of Directors.

So what are the jobs of a board? What are the fundamental things that directors ought to be doing? I characterize these tasks as three lines of sight: hindsight, oversight and foresight.

Hindsight is looking in the rearview mirror. The audit committee, the quarterly accounts, the compliance reports to the regulatory authorities, and the reports out to the shareholders on a quarterly basis. That’s the hindsight.

Oversight is asking, “We planned to be in Las Vegas today and we’re in Seattle.” What happened? Is there something wrong? Did something change competitively? Did we fall to execute properly?

Boards have oversight over the company; we give approvals to various matters at a certain level. All companies, for example, have levels of capital expenditure that management can do without consulting the Board. But above that level, the Board must approve the expenditure.

A vital oversight responsibility is to understand the true operating culture of the corporation. You are going to get that sitting around the boardroom table in a large, publicly traded company. Board members typically eat what they’re fed in the boardroom. It’s essential, if you’re going to be an effective director — and hopefully on an effective board that’s adding value — that you get out in the field to truly understand the real world operating culture.

Foresight is working with management on the strategy. Where do we want to go when we grow up, and who’s the talent that’s going to get us there?

So, hindsight is the rearview mirror, oversight is “where are we today and is that strategic or operational?” and foresight is “where do we want to be when we grow up and who’s going to get us there?”

Hindsight and oversight combine into what I term the compliance and policing roles of a Board. The foresight piece is the value-adding mode. Many boards are pretty good at compliance and policing, but not very good at value adding. So, in the next posts, we’re going to start thinking about how to create a value-added board by helping them add value either through strategy or talent management.