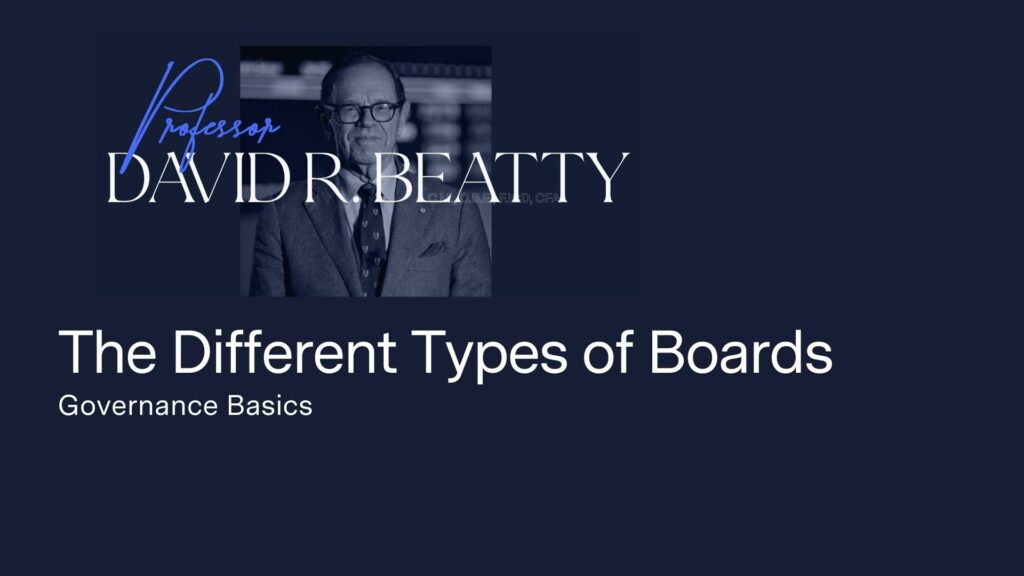 You should know there is a large ecosystem of different kinds of boards of directors and corporate governance and I have been around all of them.

The fastest growing form of business combination is the Joint Venture and/or Business Alliance. Last year, there were something like 12,000 new joint ventures and alliances formed between large companies of one kind or another. These Boards have dramatically different characteristics than their publicly traded cousins.

Another variety of board is the Private Equity and/or Venture Capital company board. There are now something like 6,500 private equity firms in the world and each of them would have from 10 to 100 companies in which they have invested – each with a board of directors and each such board very different from that of a large publicly traded company Boards.

Then there are the not-for-profit charitable, not-for-profit administrative and family companies Boards – again all different. There are hundreds of thousands of them.

Finally, often forgotten but hugely important in Canada, there are the Agencies, Boards & Commissions (the so-called ABC’s) of governments. Linda Hohol, the current Chair off the Institute of Corporate Directors in Canada, led a study in 2007 of the ABCs in Province of Alberta for the then Premier Ed Stelmach. She was “amazed” to discover that some 50% of the goods and services delivered in the Province came via ABCs.

But overall, my experience would tell me that there are a number of commonalities in all of these Boards of Directors. Understanding what makes any Board effective as a Board cuts across all these differences. We’re going to describe and discuss them in more detail in the following posts.

I want to thank you for reading this post, and I hope that together we really can build a future that includes the careful craftsmanship of your Board of Directors, so that it can truly add value to the trajectory of your company.