The Digital Tsunami: How Boards Are Adjusting 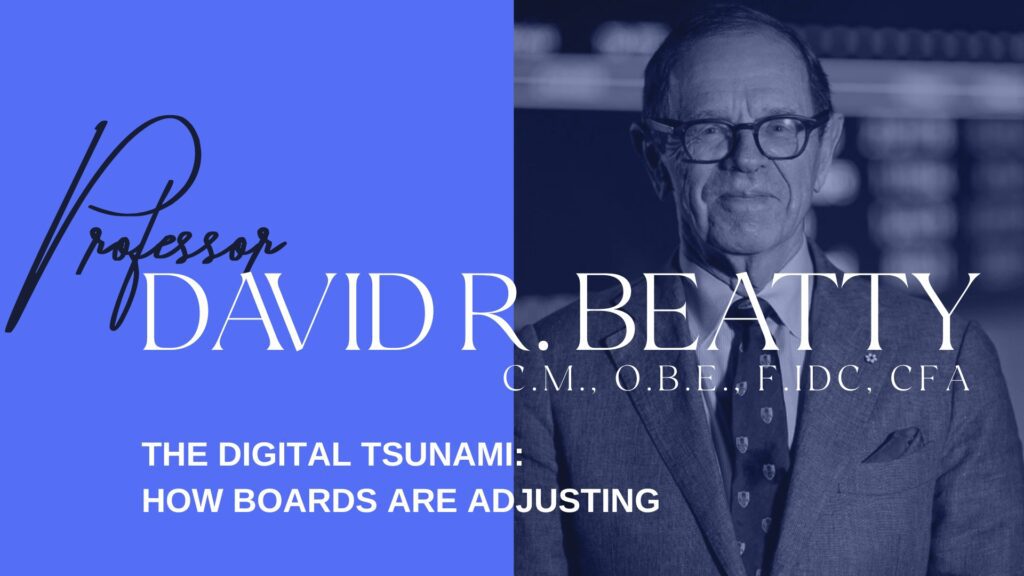 The transformation occurring today in the world of business is nothing short of a fourth industrial revolution. I refer to it as a ‘digital tsunami,’ and it is increasing in intensity by the minute. The question is, how many of today’s businesses will survive?

In recent months I have been working alongside Google’s former Chief Evangelist Nick Darveau-Garneau and Rotman School Guest Lecturer to understand how boards are reacting to the tsunami — and what concrete steps they can take to help their companies survive. One of the first things Nick and I did was look at the average age of directors on today’s boards. We were immediately inspired by Walmart, whose board and C-suite have deemed that their main long-term competitor is Amazon, not another grocery or homewares chain. As a result, Walmart now has three directors in their 40s.

In the Toronto Stock Exchange (TSX) Composite 220 from 2016 to 2021, we looked at the percentage of board members who are below age 50 — not 40, but 50. The result surprised us: only six per cent of directors were below the age of 50, and that went unchanged for the last six years. In addition, there we found that 18 per cent of directors were above the age of 70 — three times as many as below 50. In the S&P500, the news isn’t any better — or younger. A mere four per cent of directors are below the age of 50 and 21 per cent are over 70. Neither of those numbers had changed in the previous six years. And in the UK, things are actually moving in reverse. We found that the Financial Times Stock Exchange (FTSE100) had 38 companies with at least one director under the age of 50 in 2017, and in 2022, that went down to 34.

Clearly, even now, more youthful boards are not trend ing. Anywhere. Thinking about your own board, this is certainly something you ought to consider if you want to be able to discern what’s going to happen to your company go ing forward.

The second thing we analyzed was the presence of digital expertise on boards. To gauge this, we developed a list of 20 keywords that would indicate some skill set or expertise related to digital knowledge, machine learning or artificial intelligence. The news was better on this measure: on the TSX, the proportion of total directors we identified as being ‘tech savvy’ went from 13 to 24 and the total number of boards boasting some degree of tech savvyness almost doubled over the six-year period, to 114. In the U.S., we found the number of tech-savvy directors on the S&P500 to be up to 30 per cent, while the total number of boards with tech-savvy directors grew to 366 out of 500.

Clearly, there is considerable evolution underway to ward engaging tech-savvy directors in both Canada and the U.S. In the UK it is much harder to know, because 75 per cent of listed companies don’t release a skills matrix. But of those that do, we found 70 per cent had some skills on the board that indicated tech savviness. As a side note, it is interesting that Berkshire Hathaway, Warren Buffet’s publicly traded company, has always had a tech-savvy board that includes both Bill Gates and former Yahoo President Susan Decker.

The third factor we analyzed was the number of special ized board committees that focus on a specific topic related to the business. Impressively, Walmart has one called the Technology and e-Commerce Committee. This group al lows the board to dive more deeply into the potential im pact of the digital tsunami upon the business. We found that the S&P500 had 74 technology committees in 2021, up from 52 in 2016. This is a dramatic development. In Can ada, we grew to four companies with specialized boards in 2021, whereas we had zero in 2016. Hardly a sweeping change, by comparison.

Based on our findings, we have six recommendations to offer:

RECOMMENDATION 1: Consider creating a Digital Advisory Board reporting to the board. This is a less formal way of bringing some expertise into the boardroom. While we don’t have any data on how many advisory boards there are out there, this is certainly something for boards to consider.

RECOMMENDATION 2: Always remember the phrase ‘Routine drives out creativity’ and create an innovation lab within your organization. Any large org that wants to be innovative must create a focused entity that is separated from the company’s ongoing operations. In the S&P500, we were pleased to find that some 90 companies had set up their own such innovation labs. More should follow suit.

RECOMMENDATION 3: Consider your approach to corporate venture capital (CVC). These are direct investments to ac quire start-ups and bring innovative new ideas in-house. In the first half of 2021, we found that close to 2,500 such deals were in progress, representing almost US$80 billion. CVC can be a highly effective approach for keeping established companies alive in this age of digital disruption.

RECOMMENDATION 4: Consider tasking your CEO with proac tively keeping an eye on the future. This means the board literally saying to the CEO, ‘We want you to invest X per cent of your time in understanding the future.’ When A.G. Laf ley was CEO of Procter & Gamble, he said, “To me, CEO stands for Chief External Officer. I’ve got executives who run multibillion-dollar global businesses; sure, they could use my help, but that’s not my job. My job is to find out what’s happening out there on the horizon — and to decide what to do about what I find.”

Chinese digital revolution. As he tells it, Arne Sorenson, then the CEO of Marriott, once said to Craig: “I want you to invest 50 per cent of your time in understanding what is hap pening in the hospitality industry in China. This is the most important thing you can do for this company.” Craig went on to create a joint venture deal with Alibaba — the largest single New York Stock Exchange listing in history, at $25 billion. That joint venture is now transforming Marriott’s view of its core operations.

RECOMMENDATION 5: Task the CEO to copy the fast movers. Di rectors should regularly ask them, who are the fastest mov ers in terms of digital technology that we should be looking at, and what exactly are they doing? For example, there have been over 7,000 new start-ups in the marketing space alone in the past three years. Which of these should your company learn more about?

RECOMMENDATION 6: Finally, ask the right questions. As Nick likes to say, “Don’t ask when a particular disruptive innovation will occur. Instead ask, when it does happen, how much of a difference will it make for us? Then, copy the fast movers, use your venture capital fund or start an innovation lab. Do something—anything—to get your company on track.” Our joint advice: get going now!

FINAL THOUGHTS:
Nick recently had an opportunity to speak to Elon Musk. He asked him, “In 10 years’ time, what will be Tesla’s competitive advantage?” Nick was thinking to himself, possibly batteries, self-driving capabilities or the charging network. The answer he received? “No one else will be as fast as us.” Nick’s former boss, Sundar Pichai, CEO of Google, agrees, having said that the only sustainable competitive ad vantage today is speed. So, a message to board members and C-Suite executives everywhere: If you want your organization to survive the digital tsunami, get things moving today. Any delay could prove perilous.

David R. Beatty, C.M., O.B.E., is Academic Director of the David and Sharon Johnston Centre for Corporate Governance Innovation at the Rotman School of Management. Currently, he serves as a Director of publicly-traded McEwan Copper and the private Bon Intelligence. Over his career he has served on over 40 boards and has been Chair of eight publicly-traded companies. He was the founding Managing Director of the Canadian Coalition for Good Governance (2003-2008) and is a founder of the Directors’ Education Program.