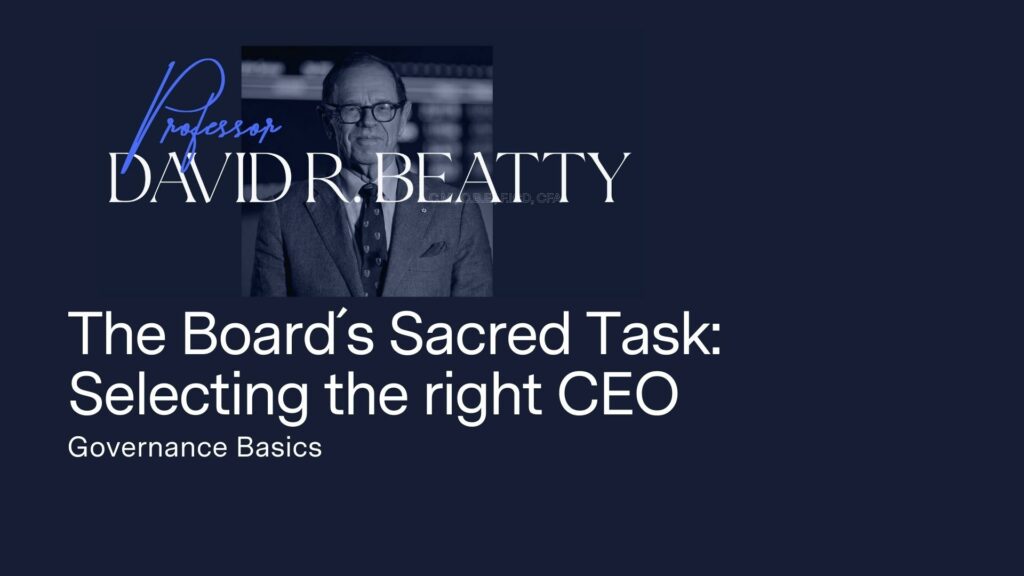 In a previous post, I described ideas for evolving your advisory board into a fiduciary board or other kind of board structure. And if you make that journey, you might reach a point at which you want to potentially move out of the CEO slot. Family companies tend to make that shift around generation three or four. Entrepreneurs tend to be a bit slower in moving out of the C-suite, so this decision might be a little ahead of you.

So, for a board director hiring a CEO, your first task is to understand what is different about the job and then to understand the attributes that go with that difference. Everybody you hire ought to be able to cope with the new responsibilities that they’ve never been exposed to before.

The second thing you need to consider: where do you want to go with this company? I’ve got some examples. GlaxoSmithKline, the pharma company, hired a CEO with a background primarily in cosmetics products, to help take them more into consumer goods and less in science. Around the same time, Nestlé was going exactly the opposite way, looking outside the consumer goods products industry and hiring someone to help them with the science.

So as a board, you need to understand two things:

Another piece of advice: if you rely only on interviews around the boardroom table, you’re going to make a mistake. Warren Buffett says the biggest mistake of any board of directors is relying on an interview to select the CEO. It may be a necessary condition that a candidate really blows you off your seat, but it’s not a sufficient condition. Therefore, you have to look externally for validation of that person’s track record. For example, did they file their tax receipts? Have they filed them for five years? What are the references from previous employers or other employees? How well do you know them as a director?

So, it’s a whole combination of things and you need to work it, work it, work it, work it, work it — because if you get it wrong, nothing’s going to go right. And my hero on this point is a Greek philosopher named Euripides; he was the one who said, “leave no stone unturned.” This is your sacred task as a board. If you’re in the position of trying to find a new CEO, work it and work it to death.

One more thing: the work done by the Harvard Business Review showed pretty dramatically that the most successful global CEOs are those that are promoted from within. Every year, HBR picks the top 100 CEOs from over 12,000 publicly traded companies. They use a whole bunch of criteria, and let’s just assume for a moment that their evaluations are correct. Over the last five years, 85% of the world’s most successful CEOs are promoted from within. Hiring from within doesn’t guarantee your success, of course, but it certainly improves your odds of success.

Dominic Barton, the former Global Managing Director of McKinsey, made it his job to talk to a CEO every week — for eight years. Fifty weeks times eight is 400 CEOs that he talked to. He co-wrote the book “Talent Wins”, which offers the hypothesis that you should never have a strategy plan without a people plan.

You’ve got to work hard a detailed management development training. And that’s not just a tick-the-box exercise; it’s a really in-depth piece of work for every director and for every HR committee for every high potential executive.

So, if you have to find a new CEO, the selection will require a huge amount of work. The odds are that you’ll make a better decision if you promote somebody from inside. But either way, you’re going to have to work this one to death. Make sure your sacred task of selecting the CEO is done effectively, efficiently and successfully.