Start Building an Advisory Board (5/10)  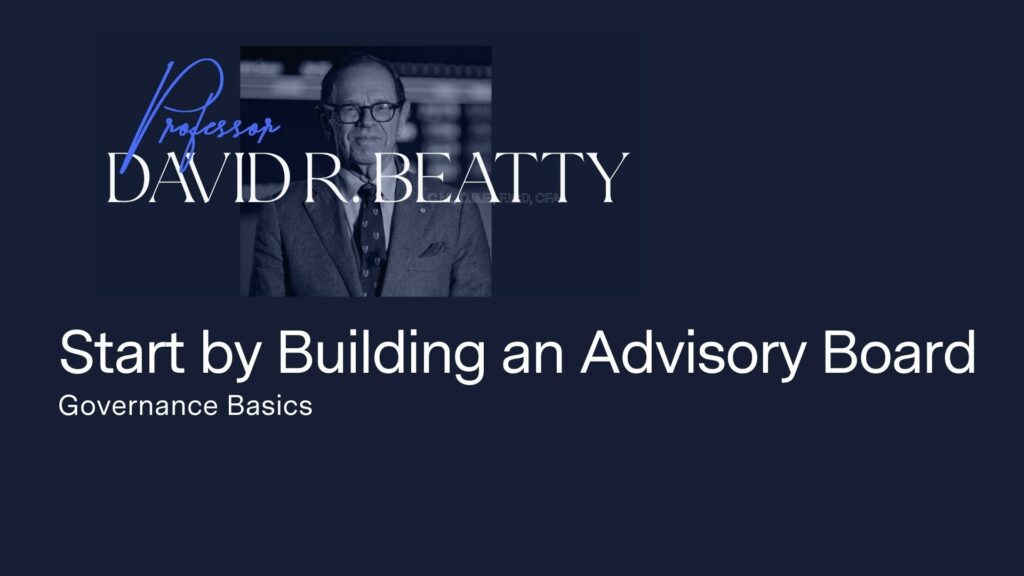 When you start off a business, like a small startup, there’s just you, your management team, possibly a couple of angel investors who are helping you, and maybe the a family member who has invested. As a next step, you might say to yourself, “I should put together an advisory board, just somebody to knock stuff around with; someone who is out of the company in a way, but close enough that they can help and that they care.”

So advisory boards are not uncommon. And I think they’re an extremely useful device for you.

Reason #1: You always need to have somebody you can talk to outside of your business if you’re the entrepreneur, founder, CEO. Some 85% of the S&P 500 CEOs canvassed by McKinsey said they really wanted an outside mentor – someone they can just talk to.

Any entrepreneur gets sucked into the vortex of the business and the challenges of day-to-day life. There are a dozen things to get done before noon. It’s tough to get through the “to-do” list and find the time and the mental space to take a medium- to longer-term look as to where you are, where you want to go and how you are going to get there.

An advisory board, in a way, gives you that chance to breathe and get out of the minutiae. You can think again of being at 20,000 feet and looking at the opportunity, before you go back into the minutia.

Reason #2: An advisory board is a great vehicle to allow you to reflect upon your situation. If the meeting’s coming up next weekend, then you’ve got three or four people that you respect and admire who are coming in just to talk about your business. In that case, you have to stop and think about yourself, how you’re doing, what’s happening, what might happen and how good your team is. You have to be reflective.

Peter Drucker, arguably the greatest management thinker of the last century, said “to be effective, you have to be reflective.” An advisory board is a forcing device to make you reflect on what you’re doing, because you’ve got to communicate your situation to people who are from outside — people who are basically investing 1% or 2% of the time that you’re investing in the company. And so they’re a very valuable resource, but only if you have thought through what it is you want to teach them about your business so they can help advise you about taking it forward.

So, advisory boards are a very good place to start. They’re informal, but they do require discipline on your part. As time goes on, you probably want to regularize your advisory board more and more. By that, I mean things like the meeting times; maybe the meeting frequency should be established as a regular basis: once a quarter, once every two weeks, once every four weeks, whatever. Then you should get more and more attention paid to the briefing papers for the advisory board. Ask yourself, “am I really bringing them into the picture?” Over time, it begins to look more like a formal apparatus than just sort of a casual grouping of friends chatting over a coffee or beer. And that’s a nice evolutionary path because that might eventually take you into a fiduciary board where the responsibilities of the directors are to the corporation, not to you. But that’s a big step away.

So, I’m happy if you have an advisory board and I would hope that it’s adding value. I’d encourage you to think about the talent you have around that advisory board as it gets more formalized, moving from family and friends to maybe an industry expert, to maybe somebody who has done this before. At one of the incubators, the Creative Destruction Lab (CDL) we’re involved with at the University of Toronto, we say that we like to have somebody involved in a startup “who’s seen the movie before.” They can help you avoid common pitfalls, so you can focus on the things that are going to matter.

The other thing the CDL insists upon: the mentor and the management team work together and come up with three things absolutely essential to building the business in the next six months. Every entrepreneur has a million things to do by noon, but are they the things that are going to help the company grow and survive, or are they not? Helping figure out those top three priorities — so that you can execute them with certainty — is a really vital part of your startup.

So advisory boards, yes. Move them beyond family and friends, and then start thinking about some external experts. That will start to migrate the board from a casual sort of interchange to a much more structured one. And I think that will add the considerable value to the long-term trajectory of your startup and your business.