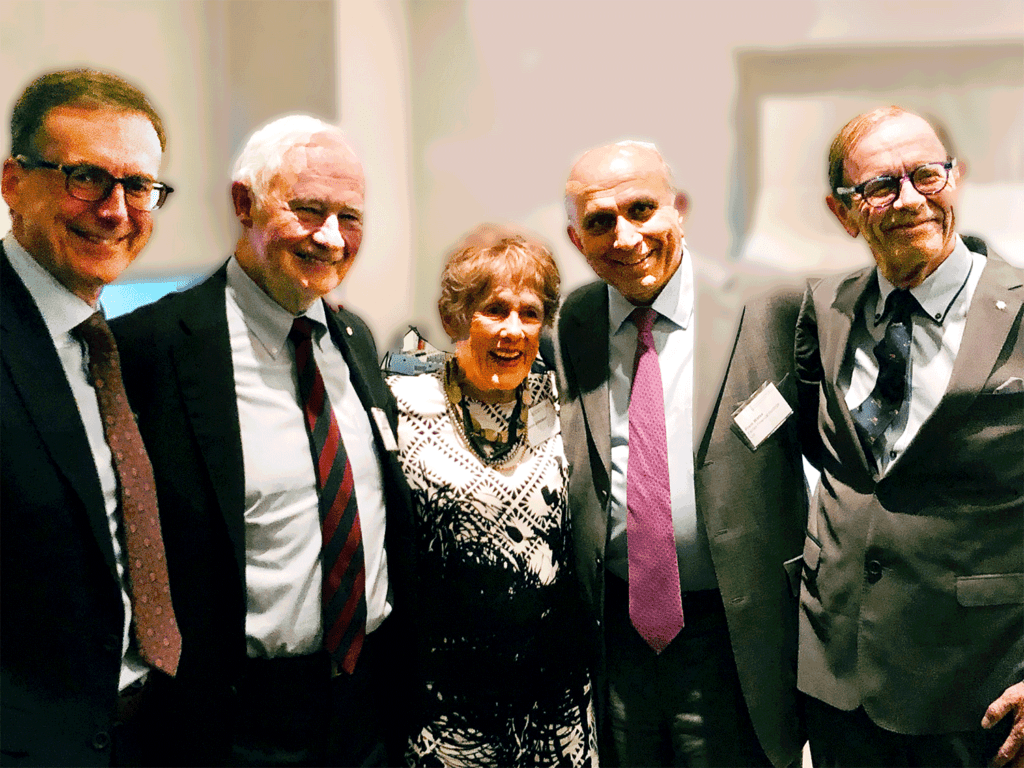 This is a hugely momentous day – a day when we celebrate the building of TRUST – TRUST in the special sense that governance structures matter and matter enormously to the confidence of societies in their leadership and the resultant peace and prosperity that results.

In Canada, we have a leadership position in that SOCIETAL TRUST. This has been noted, enhanced and encouraged by the Right Honorable David Johnston in his most recent book “TRUST” and in his seven years serving as Canada’s 28th Governor General with his wife Sharon.

But, in Canada, we also have a leadership position in TRUST via the excellence we have achieved in Canadian Corporate Governance.

Corporate Governance began in Canada with the Dey Report in 1995. Until then boards in the so-called “Age of Managerial Governance” were mainly advisory boards and rubber stamps.

Then, the folks who owned the companies, the asset managers, began to wonder what Boards were all about.

They may well have remembered Irving Olds, the CEO of US Steel, saying in 1945: ”Directors – parsley on the fish – decorative but not useful.”

Stephen Jarislowsky, Claude Lamoureux and Michael Wilson decided it was time to move on “beyond parsley” and created the CCGG.

Fast forward a decade and a combination of PeterDey’s initiative in “awareness building” and the innovation of a half dozen money managers leading to the CCGG (now by the way composed of over 50 asset managers representing some $3 trillion of AUMs) has led to Canada being ranked #1 in the world for the quality of its governance by Institutional Shareholder Services.

The best in the world in corporate governance of publicly traded companies.

There are four major pillars that have given rise to this achievement:

We, at the Rotman School and with the help of the CCGG and the ICD have innovated in each of these fields.

Peter Drucker, commenting on how wagon trains used to traverse prairies in convoys said that the way they went faster was for the leader to go to the front of the train – find out what made those wagons at the front so effective and to bring that insight back to the middle of the train.

The CCGG innovated that practice in corporate governance and this last year published its 13th such report. This is the “carrot”

Peter Drucker also opined that “Good intentions are not enough: results count”. So, 14 years ago the Clarkson Centre here at Rotman began measuring the performance in the governance practices of 250 companies.

The results of our work are published annually in the Globe & Mail RoB under the heading Board Games – and they are widely followed and often hotly contested !! This is the “stick”

When Rotman and the ICD partnered to begin the Directors Education Program in 2004 we thought we might get to double digits in the number of times the course was subscribed.

Friday, May 25th we will open our 82nd offering here in Toronto and that makes 175 across Canada where we are in partnership with 11 other business schools.

That means we have not only educated ~6,000 senior Canadians in how to be more effective in boardrooms but we have generated over $125mn in fees for the Universities and the ICD.

And the professional designation of ICD.D is becoming a widely accepted badge of competence and potential.

Each year the ICD celebrates the achievement of a small number of directors – we hope you can join us June 6thhere in Toronto for yet another such celebration.

It is my belief that Canada ranks #1 because we have this fully integrated activity set where we:

No one else in the world comes even remotely close to replicating this set of activities.

So, Canada, the CCGG, the ICD, the Rotman School and 11 business schools across this land have been innovative for over a decadein this vital field of Corporate Governance.

And now, we can continue on in this proven tradition under the wonderful new rubric: The David & Sharon Johnston Centre for Corporate Governance Innovation.

To David & Sharon, our very special sponsors and our colleagues in the field both here and abroad we pledge to remain at the center of corporate governance innovation and to lead many of these innovations in a wide variety of fields:

Thank you all for joining us here tonight and for promoting innovation in Canadian corporate governance to further build TRUST in Canada and to produce an ever more wonderful nation in which to live.